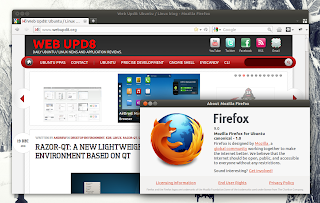 Firefox 9 has been released today (is already available for download via direct links but the website hasn't been updated yet) with improved JavaScript performance (by 20 to 30%) thanks to Type Inference, some additional HTML5 and CSS support, support for querying Do Not Track status via JavaScript and the usual bug and stability fixes. More info, HERE.
Firefox 9 will be available as a security update via the official repositories for Ubuntu 11.10 Oneiric Ocelot and 11.04 Natty Narwhal users, but if you don't want to wait, you can already install it by using the Ubuntu Mozilla Security PPA:
For Ubuntu Lucid and Maverick, Firefox 9 should be available in the Firefox Stable Channel PPA soon: "ppa:mozillateam/firefox-stable" (in fact, the packages have already been built successfully, but publishing has been disabled for the PPA for now).
Until the Mozilla website is updated to provide the latest Firefox 9, here are direct download links: Linux, Mac and Windows.